The Trade Desk (Nasdaq:TTD) has been an under performer vs. S&P in 2021 after having a great run in 2020 when it significantly outperformed the market. 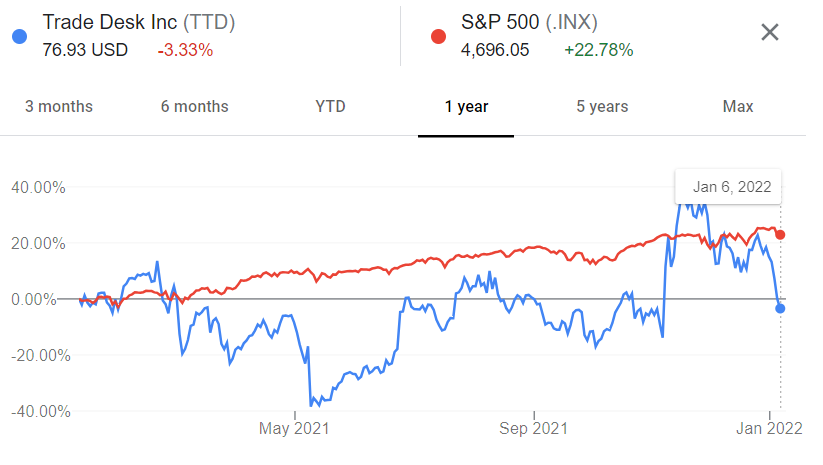 – Steady stream of new brands & agencies started to work with TTD for the first time in Q1, and they continue to win additional spend from existing customers.

– International spend grew much faster than spend in North America. Growth in EMEA was especially strong. They saw positive results from CTV investments they made in Europe. APAC outgrew US & they foresee that to continue. NAM is still 87 % of spend, Int’l is 13%. Shanghai, Hong Kong & Tokyo spend doubled.

– Collaborations with OpenAP & Blockgraph – Interoperability with UID 2.0. List of publishers, advertisers, DMP’s (in integration process or committed to UID 2.0) are larger than announced publicly.

– They talked about the innovations on top of UID 2.0, which is Double Encryption for Publishers (“DEP”)

“DEP allows publishers to encrypt UID2 and only unencrypt it for designated parties, such as a particular advertiser or partner. DEP protects against data leakage and the publisher has the power to control the process with precision. DEP is an important innovation for publishers as they integrate their single sign-on process into a broader ecosystem. This can be used to prevent a company in the middle, even in the ad-serving walled garden, from taking data or insight. By the way, this is just one example of how UID2 allows for innovation on top of the core open source technology. In this way, UID2 will ultimately prove to be an innovation that supports more than just today’s privacy expectations.”

– Solimar launch in summer, UX is redesigned, all features of TTD’s platform in easy to use interface.

– Q4 growth rate will comp against the significant spend generated in Q4 of last year, driven by the rebound in digital advertising as well as material U.S. political election spend.

– CTV – In H1, the number of brands spending 1M+ (large advertisers) & 100K+ (mid-sized advertisers) in CTV doubled YoY. Nearly 10K CTV advertisers on the platform, up 50% YoY. Reach more than 87M households. CTV revenue in Europe was up more than 11x in Q2’21. Expect CTV to continue to drive TTD’s growth over the next 2 years and beyond.

CTV word was used 77 times on the earnings call.

– Report from Moffett Nathanson – AVOD is growing from 4.4B in 2020 to 18B in 2025. Every major AVOD platform (Hulu, Peacock, Paramount, FuboTV, etc.) are reporting record viewership or ad spend #’s and see a rapid growth.

Some of the world’s largest advertisers have signed new contracts in recent weeks/months increasing & extending their commitment to TTD’s platform. Walled gardens may provide easy access to scale, but they don’t provide precision and decisioning which are vital to today’s marketer.

Solimar – With Solimar, TTD created the industry’s most advanced measurement marketplace, and you can’t build that without simple & secure data onboarding. You don’t get real performance measurement without the ability to enter more precise campaign goals and Solimar provides for all of that and much more.

UID 2.0 – Major advertising holding companies like Publicis, Omnicom, IPG announced support for UID 2.0. The publishing side is embracing UID 2.0. Snowflake deployed UID 2.0 which is huge given they act as a hub for many companies’ customer data, their first-party data, and that data could now be activated by using UID 2.0 identifiers. Momentum around UID 2.0 has accelerated since the Google announcement.

International – International grew faster than the US. Relationship with Sky & Channel4 and partnerships with premium content providers in France, Germany, Spain & Italy gives them access to the majority of CTV ad impressions across the continent.

APAC & India – Opened an office in India (whose market size is expected to exceed 7B in 2024, 10x from 2015). Indians are spending an average of 8 hours/day online on OTT. CTV first approach in India. Struck a deal with Samsung ads (gives access to Samsung Smart TVs w/ 50M reach). Partnership with Xiaomi (Xiaomi serves more than 10B ad impressions per day on their devices). Relationships with Disney+ Hotstar.

Walmart will launch a new DSP which integrates Walmart shopper data & is built on TTD. They will get all the fees that are associated with running the campaigns (platform fees, data fees, etc.). With the Walmart deal, it lays down the gauntlet for everyone else. Would be strategically suboptimal if they didn’t get any other retailers and their data on their platform.

UID 2.0 Inflection Point Commentary ~ “When you get to a place where the currency is so widely accepted, it becomes critical to doing business. So think of it like Visa or MasterCard, a currency that if you do not accept that currency in your local store, you are going to struggle to get business. You might be able to say, “Oh, I won’t accept American Express,” or, “I might not accept Discovery.” But there are some currencies like either cash or Visa or Mastercard that you have to accept in order to just keep the doors open. UID is at that inflection point, where it’s become so interoperable with other currencies, that’s making certain that you’re interoperable, if you’re something new or if you’re a TV company, you will be operating at a disadvantage if you are not interoperable with UID2“

First-Party Data & Measurement Marketplace (MMP) w/ Solimar – Not about making money directly. Just gets the flywheel spinning faster. By giving them away, they make the efficacy of the platform better.

CTV word was used 48 times on the earnings call.

5 major highlights:
1/ Video accounted for 40% of the business. CTV spend grew more rapidly in EMEA than anywhere in the world.
2/ International growth outpaced domestic growth. International expansion continued at a strong pace. established a presence in markets like India, Italy and the Nordics, and Taiwan
3/ Walmart DSP launched. Starting to see test budgets from some of the largest brands in the world. These budgets are incremental.
4/ Unified Id continued its strong industry-wide momentum and is reaching critical scale in the market.
5/ Mobile business continues to be resilient. No IDFA impact. No supply chain impact.

TTD asking SSPs for Supply Path Optimization: “Publishers use multiple SSPs we often have access to the same inventory from multiple sources. We’ve asked those SSPs to put in place a solution that identifies duplicative inventory so that we ensure bidding on the right impression at the right time all the time. There’s been overwhelming support and adoption for this approach as it increases the overall efficiency of the supply chain“

Daily avails on TTD’s platform with UID reached an all-time high. Even some of the walled gardens were passing an encrypted version of UID2 in their marketplaces and ecosystems.

Solimar: “By the beginning of 2022, the majority of impressions on our platform will be bought via Solimar. The use of both precise goal setting and activation for first-party data has increased the ability of our AI to better optimize every campaign with data. Our goal is for advertisers who activate Solimar to utilize more data per impression and achieve measurable improvement in return on ad spend. In doing so, that helps the advertising flywheel spin much faster.“

Walmart DSP: “What they are doing is unleashing their shopper data so that advertisers can understand the relationship between their advertising tactics and actual in-store or e-commerce activity. We think about this as closing the loop.“

Predictive Clearing: “We use our data tools and our AI to predict the clearing price of first-price auctions. Advertisers can then bid as close to the winning price as possible without overpaying. With Solimar’s upgraded predictive clearing, we’ve massively upgraded the product to use AI to help our customers save collectively tens of millions of dollars. That’s because this upgrade allows us to be much more aggressive in bidding and budget management, significantly lowering CPMs and increasing an advertiser’s return on ad spend. We are seeing predictive clearing improvements resulting in the reduction of CPMs across the board of customers that have activated this feature, thanks to the Solimar upgrade.“

NAM = 88% of the spend. Shanghai & Hong Kong drove spend growth in Northern APAC and Australia & Indonesia led our growth in Southern APAC. London led the way, nearly doubling year-over-year in Q3. CTV across EMEA was again very strong, growing faster than in any other region in Q3. Travel, shopping, and home and garden were the strongest performers in Q3.

Midterm elections in 2022. There have been some forecasts that basically the spend on digital will be the same as the presidential election year.

On CTV: “We have an expanded relationship with Peacock. And you’ll remember that Peacock has rights to NHL, has rights to the NFL, has rights to the Olympics and in the U.K. to the English Premier League, to say nothing of the other $30 billion of content that they have. So doing more partnerships like that with content owners all over the world is the most important thing that we can continue to do because, in most of the major markets, we already have a starting point that is really strong, not dissimilar from what we did in retail where we started with the biggest. We’ve done very similar things like that in CTV all around the world. We just have to keep doing more of it.“

“What does the company need to do to get to $2 billion or even $5 billion in revenue over the next few years?” This might be the most important question for us as a company. I’m always reminded of the locker theme at the end of the movie Hoosiers where they’re talking about how do we win this game, this smaller team from a smaller town competing with teams that are much bigger than them in every way. It’s not dissimilar from what we’re doing with some of the biggest companies in tech in, arguably, the history of the world. And the way I look at it is we cannot lose sight — just like that locker room speech in that movie, ignore the fans, ignore all the outside forces and just play your game, do it the right way. And this is essentially the same thing I’m saying to our team over and over again. If we just stick to what we do really well, we continue to win in CTV, we continue to serve our customers the way we have, we focus on the buy-side the way that we always have, we try to make the supply chain more efficient, we add more value than we extract. If we keep doing all the same things that we’ve done for the last 10-plus years, I think we’re going to get from $1 billion to $5 billion ahead of anybody else playing the same game. We’re just a tiny, tiny speck of what we’re yet to become.

On AMC partnership to enable programmatic addressable ads in linear TV: “We’re looking at a new, albeit small, but a new area where we can create more inventory, and that is with addressable linear CTV or television. This is an OpenRTB request to the Trade Desk, where we can make a decision on an impression-by-impression basis to deliver an ad back to AMC. And so it’s unique in that is expanding into a new area of television in the linear. But the look of it to us is exactly like connected television where we get a request and we’re able to bid back in real-time on linear television.”

Things I'm looking for in Q4'21 and beyond

– Looking for continued updates on International growth (faster-growing segment vs. NAM), Solimar (how it’s benefiting their client and motivating them to spend more), Walmart DSP (and potentially other retailers onboarding their user data and working with TTD – which would be huge), continued adoption of UID 2.0 (along with integrations/interoperability updates) and Connected TV.

I think Jeff Green & co. keeps executing well as they have been doing it so far.

Disclosure: I work for AdTheorent (Nasdaq:ADTH) and the views in this post are solely my own and are for educational purposes only. None of this should be construed upon as financial advice.