This article assumes the reader has basic understanding of Programmatic AdTech ecosystem. If not, they’re highly encouraged to read this post before proceeding.

The Trade Desk (TTD) released Solimar – their biggest upgrade so far in the summer of 2021. Jeff Green, the CEO of The Trade Desk mentioned a feature called “Predictive Clearing”, which is what I wanted to expand upon in this post. The below is an excerpt from their Q3’21 earnings call.

Similar to when an operating system is upgraded, there were many upgrades to key features on Solimar. One of those features is called predictive clearing. What this means is that we use our data tools and our AI to predict the clearing price of first price auctions. Advertisers can then bid as close to the winning price as possible without overpaying.

With Solimar's upgraded predictive clearing, we've massively upgraded the product to use AI to help our customers save collectively tens of millions of dollars. That's because this upgrade allows us to be much more aggressive in bidding and budget management, significantly lowering CPMs, and increasing an advertiser's return on ad spend. We are seeing predictive clearing improvements resulting in the reduction of CPMs across the board of customers that have activated this feature, thanks to the Solimar upgrade. These kinds of efficiencies are important to all of our customers.

Before I dive into the Predictive Clearing, I want to talk about the Second & First Price Auction types. 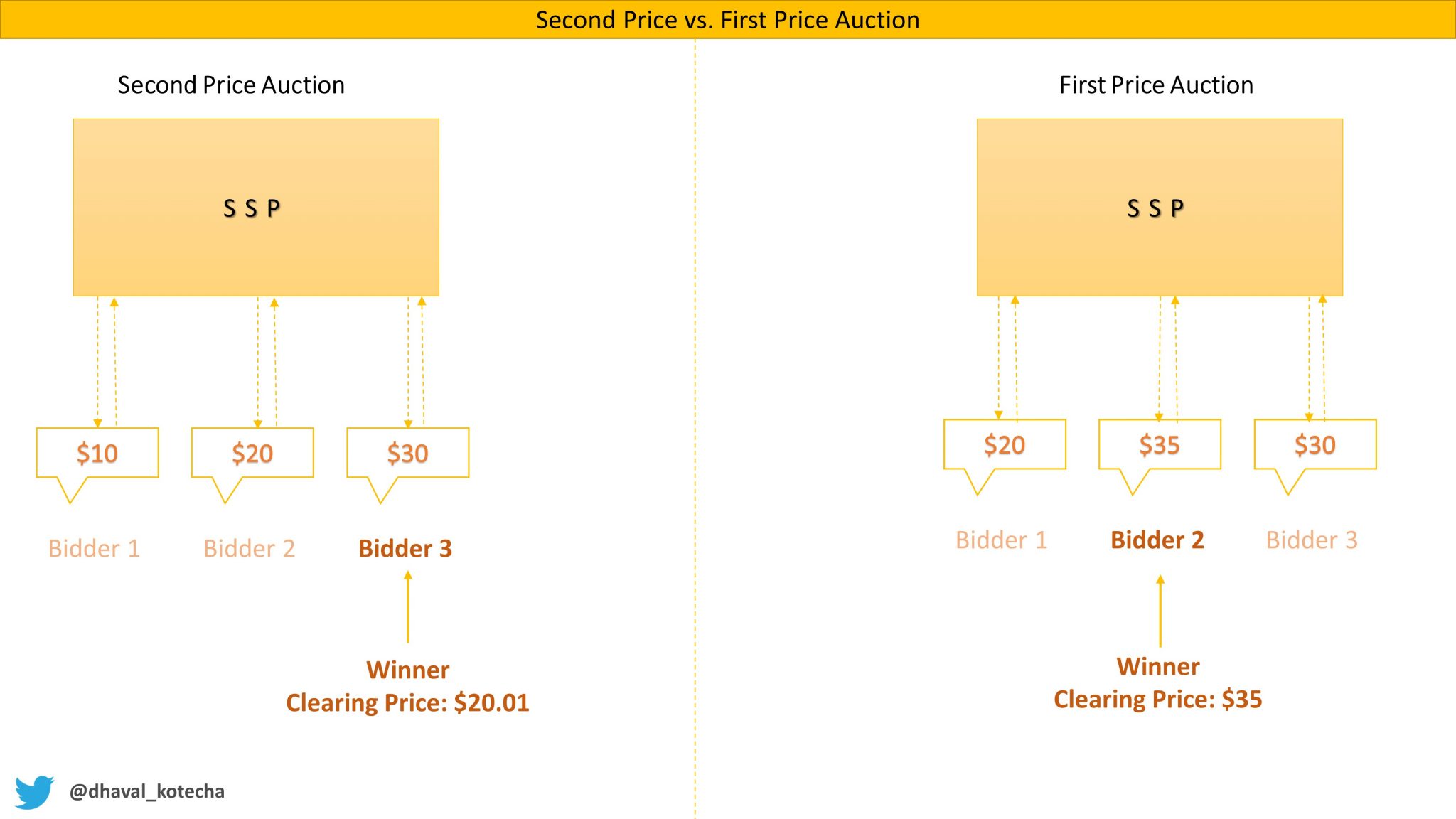 As seen from the illustration above, even though Bidder 3 bid $30, it only paid $20.01 because the second highest bid was $20. This meant that the Bidder 3 could bid any high number for the inventory it really wanted with a low risk of paying the bid price it actually bid at, because of the way second-price auctions worked.

There were a few issues with the second price auctions, primarily with transparency, on the DSP side. With this type of auction, the highest bidder has no knowledge of what the other bidders bid. The SSP itself could potentially submit a fake bid at $29 given it knows what all bids were received to manipulate the auction (to generate more revenue for itself), which means Bidder 3 would end up paying $29.01 instead of $20.01. This is obviously not ideal for the programmatic ecosystem. Because of how the second price auctions could be manipulated, more DSPs started to move towards the first price auction.

With the first price auctions, if a bidder wins an auction, it pays the same price it bid at. As seen from the illustration above, Bidder 2 bid $35, it won the auction and paid $35. This means they might end up paying a little more, but with the knowledge of what they’ll exactly pay if they won.

To improve on the margins, DSP’s would need a solution that would make them win at the same rate, but at the lowest possible price. That is where Predictive Clearing comes in play. It allows the DSP’s to bid at a bare minimum price to make them win the auction. This piece of technology constantly evaluates the bidding behavior and keeps adjusting the bid prices based on the win rates. 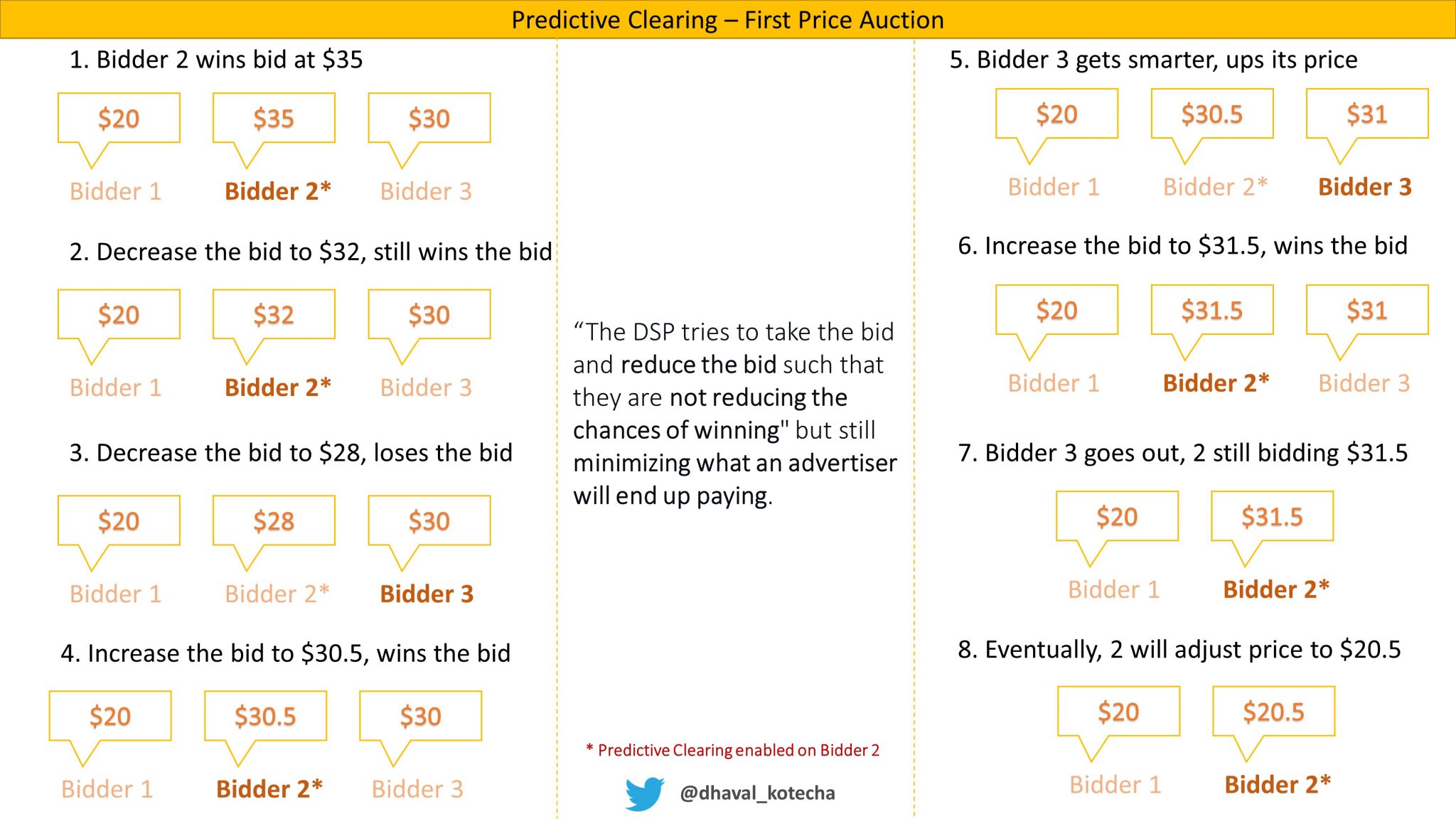 From the illustration above, Bidder 2 is where Predictive Clearing (“PC”) is enabled. The first price auction behavior w/ PC is as below:

1. Bidder 2 bid $35 and won the auction. This would suggest the PC to go lower and check if it can win the auction at a lower price.

2. Bidder 2 now bids at $32 and wins the auction. Advertiser sees a saving of $3 already with this move, but PC still would attempt to go lower and see if it can keep winning.

5. In this process, imagine if Bidder 3 gets smarter after a while, starts bidding higher at $31.

6. This would mean the Bidder 2 PC will kick in again and try to raise the price to $31.5 which will make it win the auction.

7. Eventually, Bidder 3 doesn’t bid and goes out of auction. Bidder 2 is not aware of Bidder 3 dropping and continues to bid at $31.5, which is very high when compared with the price needed to win the auction.

8. PC kicks in Bidder 2 over time and readjusts the price so that it now bids at $20.5. This is made possible because PC throws in an occasional lower bid to check if it is bidding at an optimal price or not.

I hope this post gave a good understanding of how this piece of technology is important for the DSP’s as it ensures the advertisers pay the least amount needed for them to win an auction in an automated way.

Disclosure: I work for AdTheorent (Nasdaq:ADTH) and the views in this post are solely my own and are for educational purposes only. None of this should be construed upon as financial advice.